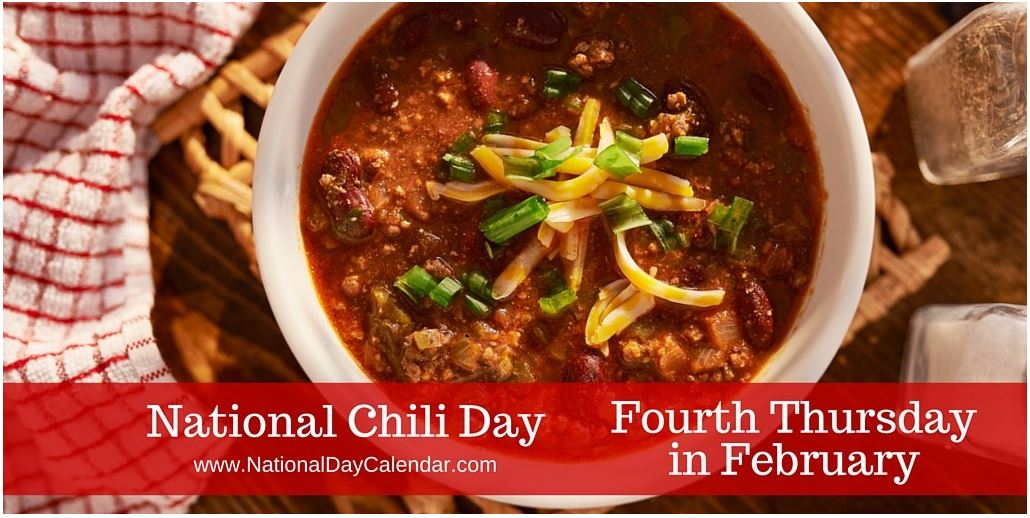 Happy National Chili Day! Yes, today is the day that we pay tribute to one of America’s favorite foodstuffs.

It is fitting that we celebrate National Chili Day every year on the fourth Thursday of February since there’s nothing better than enjoying fiery fare during one of the winter’s coldest months.

When it comes to the story of chili, tales and myths abound. While many food historians agree that chili con carne is an American dish with Mexican roots, Mexicans are said to deny indignantly any association with the dish.

Another yarn goes that Canary Islanders who made their way to San Antonio as early as 1723 used local peppers and wild onions combined with various meats to create early chili combinations.

Most historians agree that the earliest written description of chili came from J.C. Clopper, who lived near Houston. His description never mentions the word chili. Ingredients were nearly as many peppers as there pieces of meat—and was all stewed together.”

In the 1880s, a market in San Antonio started setting up chili stands from which chili or bowls o’red’s, as it was called, were sold by women who were called “chili queens.” A bowl o’red’s cost diners ten cents and included bread and a glass of water. The fame of chili con carne began to spread, and the dish soon became a major tourist attraction. It was featured at the World’s Fair in Chicago in 1893 at the San Antonio Chili Stand.

By the 20th-century chili, joints had made their debut in Texas and became familiar all over the west by the roaring ‘20s. In fact, by the end of that decade, there was hardly a town that didn’t have a chili parlor, which was often no more than a shed or a room with a counter and some stools. It’s been said that chili joints meant the difference between starvation and staying alive during the Great Depression since chili was cheap and crackers were free.

U.S. President Lyndon B. Johnson was a big chili lover. His favorite recipe became known as Pedernales River chili after the location of his Texas ranch. Johnson preferred venison, which is leaner to beef, probably due to doctor’s orders about his bad heart. Lady Bird Johnson, the First Lady, had the recipe printed on cards to be mailed out because of the many thousands of requests the White House received for it.

In 1977, chili manufacturers in the state of Texas successfully lobbied the state legislature to have chili proclaimed the official “state food” of Texas “in recognition of the fact that the only real ‘bowl of red’ is that prepared by Texans.”

So what ingredients make the best chili?

Some cooks insist it’s all about the cumin while others choose coffee. Others say beef bouillon is a must, but some say it’s beer. Popular items for this steamy stew are ground beef, pork, venison and chili peppers, while variations, depending on geography, also include onions, peppers, tomatoes and, of course, beans.

Probably one of the most famous chillis is Chasen’s, named after the legendary restaurant in Hollywood. Owner Dave Chasen entrusted his recipe to no one and for years came to the restaurant every Sunday to privately cook up a batch, which he would freeze for the week, believing that the chili was best when reheated. Chauffeurs and studio people, actors and actresses would come to the back door of Chasen’s to pick up the chili by the quart. It’s said Elizabeth Taylor had 10 quarts flown to her in the early 1960s while filming Cleopatra in Rome.

Top items purchased with chili in order of popularity:

So take pleasure in this special day and make a delicious batch of chili for yourself, your family and friends. Whether you like your chili mild, spicy or just plain hot…HAPPY NATIONAL CHILI DAY and ENJOY!! 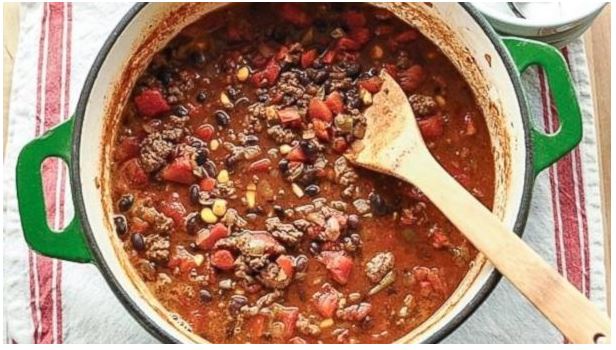