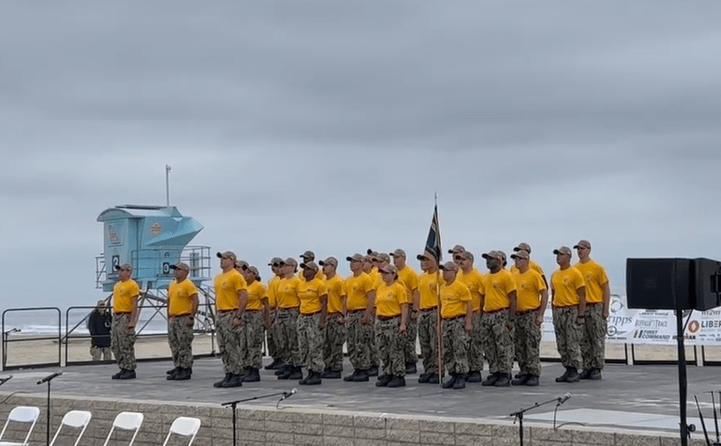 Ranch Events has had the honor of being chosen for the 7th year in a row as the catering company of choice for the annual CPO (Chief Petty Officer) Pride Day.  This year the event was held at the Silver State Beach on Coronado Island.  This celebration was an all-day affair beginning at 9 am in the morning and ending at 3 p.m.

To kick off the morning festivities, multiple coffee stations and beverage stations were set-up throughout the venue so everyone could get their morning beverage of choice.

The vision for the Navy Chiefs is coming together in a concerted effort to strengthen their camaraderie, exemplify to Selectees the power of the CPO MESS and give back to their community.

San Diego’s Fleet Week 2021 was from November 4th through November 11th.   This is the week in San Diego the community joins together in thanking our Sailors, Marines and Coast Guardsmen for their services to our country.

The first Fleet Week was celebrated in San Diego, California, in June 1935 as part of the California Pacific International Exposition. Under the command of U.S. Navy Admiral Joseph M. Reeves, Commander-in-Chief of the U.S. Fleet, 114 warships and 400 military planes arrived with more than 3,000 commissioned officers and 55,000 enlisted men. Thousands of San Diegans and other exposition-goers were guests on the various ships.

Over time, community and business leaders who understood the great depth of public support for our military cultivated Fleet Week San Diego. They shared a vision to recognize the contributions made by the armed services to the many communities of the greater San Diego region. Ranch Events is proud to be able to participate in the prestigious event.

To fulfill its mission, Fleet Week San Diego honors the men and women of the military through public events and alliances that support and thank these heroes throughout the year. Events such as the Coronado Speed Festival, the Enlisted Golf Tournament, and the Miramar Air Show are sell-outs year after year, and provide a way for the San Diego community to interact with the military in otherwise restricted ways.